The Belgrade Gate is the most impressive building of Petrovaradin Lower Town and is a historical monument of Novi Sad. It was built in 1753 as a monumental building in the Classical style. It is the symbol of the liberation of the city when Serbian army entered in Novi Sad in the First World War, on November 9, 1918.

The gate was reconstructed in 2015 in action that Banca Intesa started. The action was launched in 2011 and the reconstruction cost 35 million dinars. The gate is 10 meters high. Its external facade is 40 meters long and inside 20 meters long. Façade entrance gate has six pillars with two windows, one above is restored crest of Novi Sad, destroyed by invaders in 1941. The gate contains 4 rooms for the guards on the two sides. The second part of the facade gate has eight pillars with three oval and two rectangular passages. On both sides of the gate, there are two passages for pedestrians and two lanes for the traffic. 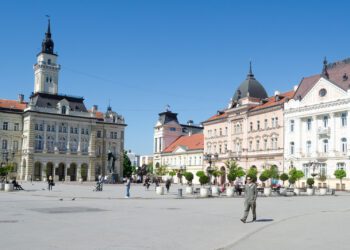