Along with the construction of the city in the eighteenth century the main square was built, Square “Trg slobode”, which often changed names throughout history to the present day. Under the rule of the Habsburg square was called “Square of the Franz Joseph”, and after the First World War it was “Liberation Square”, but only after the end of World War II received the current name. The Square is the part of the main pedestrian zone, which continues to the Zmaj Jovina Street.

The main square is the center of all important city events. Accordingly, it has most important city facilities that are attractive for the tourists. These are: a bronze monument to Svetozar Miletic seven meters high in the center of the square, City Hall from 1895 built in Neo-Renaissance style, designed by György Molnár, opposite the City Hall there is a Catholic church “Name of Mary” known as the “Cathedral”, then “Hotel Vojvodina “, business center ” Apolo”. 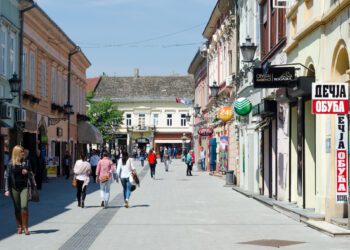 "Štrand" - the German word for the beach, and the Serbian association to Novi Sad and the most beautiful...