Tanurdzic Palace presents a modern architectural wonder from the thirties of the last century. It includes several streets: Zmaj Jovina, Modena, and Street of Ilija Ognjanovic. Honor to build this building was given to architects Djordje Tabakovic who basically “drew” Novi Sad with his projects. According to some sources, the tender for the construction gathered about 400 architects. The palace was founded by the famous Serbian merchant and benefactor, Nicholas Tanurdzic, who wanted to perpetuate its life and success in a monumental building with 5 storey apartments. Tanurdzic gave that job to Tabakovic. Construction began in 1933.

Tanurdzic and Tabakovic traveled together European capitals to get inspiration for the modern design that would be in line with major European cities. Thus, the building took on a rational architectural design without ornaments, IE. Bauhaus aesthetic style. The palace was rebuilt in 1939 in length. Tanurdzic planned to add a few more facilities and hotel and to make the most modern shopping mall in Yugoslavia, but the Second World War had made it impossible. After the war, the palace is owned by the state.
[map lat=”45.255018″ lng=”19.846332″]The Tanurdzic palace[/map] 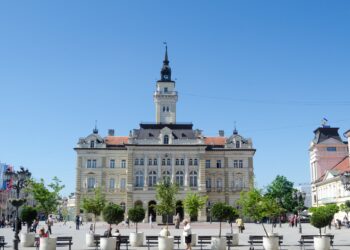